Short Hops is a weekly look at news and information that is of interest to the Canadian baseball community from the pros to the local sandlots!

Remembering Rhéal – The Canadian baseball world was rocked earlier this week when news of the passing of Rhéal Cormier was announced on Monday after he lost his life to cancer at the age of 53. Former teammates like Hall of Famer Jim Thome and Dan Plesac shared their memories about the Cap Pelé, New Brunswick native along with several former Canadian teammates from Cormier’s time representing Canada. Cormier first wore the Maple Leaf with the National Youth Team (now Junior National Team) in 1985 and followed playing in the Pan Am Games and Intercontinental Cup in 1987, the Seoul Olympics in 1988 before stints as a pro on the inaugural World Baseball Classic squad in 2006 and the 2008 Beijing Olympics.

One story from those early Team Canada days that Cormier figured prominently in was a winner-take-all showdown between Canada and Italy for the final spot in the 1988 Seoul Olympics where baseball was going to be played as a demonstration sport. The Intercontinental Cup in Cuba was scheduled to take place in October 1987 and it was decided by international baseball officials that the first game of the event between Canada and Italy would also be used to determine the last spot for Seoul.

Back in those days, professional players were not used, so Canada’s team of amateurs was made up of college players, including Cormier, or semi-pros that held full time jobs back in Canada. In fact, several players on the roster were in Cuba just to play that one game to try and qualify Canada for Seoul.

Complicating matters was the fact that a major hurricane had blown through Havana delaying the start of the tournament and qualifying game.

When the weather did clear, a 20-year-old Cormier got the start to face an Italian team that was loaded with Italian Americans and he delivered going 6 2/3 scoreless innings, allowing just four hits.

Now a draft pick of the St. Louis Cardinals after his second All-American season at Community College of Rhode Island, Cormier was part of the Olympic squad the next summer in Seoul where by all accounts he pitched quite well.

More details about that one-game showdown can be found in the photo below. 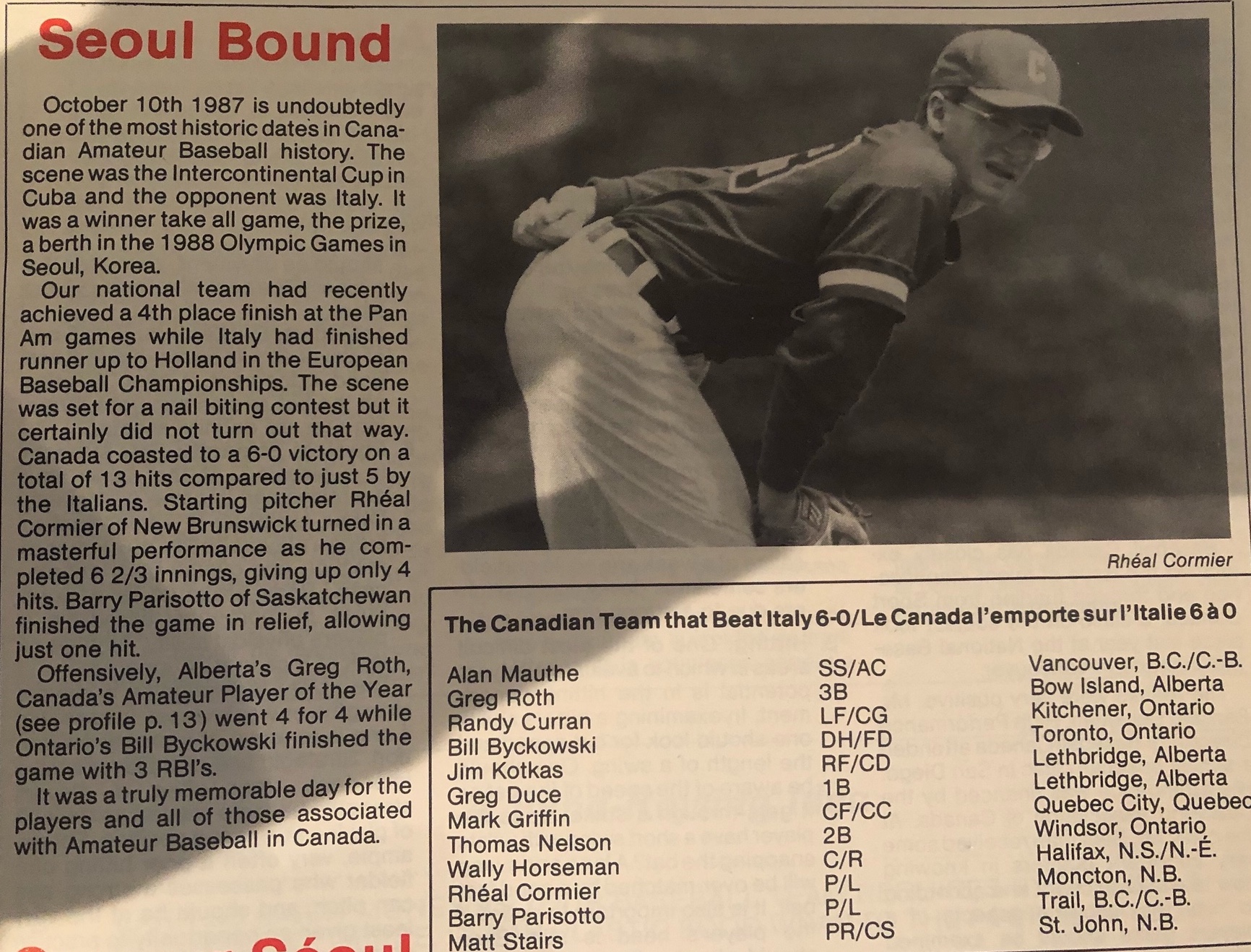 Dio does it again – This is not a typo...Former Junior National Team slugger Owen Diodati (Niagara Falls, ON) has hit three grand slams through his first 14 games of the college season. The latest one came in walk-off fashion on Tuesday to give the Alabama Crimson Tide an 11-8 with over South Alabama. The Great Lake Canadians product has four home runs on the season with a 1.072 OPS

BC Coaches Convention – Baseball Canada’s recipient of the 2020 Event of the Year, the BC Minor Baseball Coaches Conference is providing a virtual event in 2021 with registration currently open! A great list of coaches will present on all topics baseball from March 26-28. More details can be found at bcminorbaseball.org.

Calling all Umpires! - Speaking of clinics. Baseball Ontario has put together an All-Star lineup of MLB Umpires including Regina’s Stu Scheurwater to present at their Super Clinic on March 14 (THIS SUNDAY!!!). Get at the info you need to register here.

Short Hops: Get familiar with PSO Return To Play protocols.